Pastors Conference
Rabbi gave his testimony, then addressed some cultural issues that needed to be addressed for the leaders and role models here in Africa. Rabbi then spoke directly to the Pastors talking about what it means to be a servant to their people.

Crusade
It was a beautiful night tonight in Enugu, Nigeria, where the love of the Father could be felt. Rabbi called the people into a relationship with Father’s love. It’s a very Christian atmosphere here, so many people have been Christianized, but many don’t have a relationship with God. Rabbi preached on Jesus being the way, and the Father being the destination. Rabbi helped people understand that it was because of the Father’s love for them that Jesus came and died for their sins. We had between 700-800 people that came forward for salvation! There were intense deliverances and testimonies of healings.

Pastors Conference
Rabbi taught the synchronicity (the connection between the Old and New Testaments), focusing on how the New Testament begins by going back to the book of Genesis recording the genealogy of Jesus. Rabbi then taught about the nature of God and how God is revealed in both the Hebrew Bible and the New Testament as first of all – Holy. Then secondly, a God of grace and compassion. It brought some depth of understanding to the pastors, and it was a unique teaching for them to discover the joy of finding out more about the Jewish roots of their faith and the connection between the Old and New Testaments.

Crusade
Exciting massive crowd, possibly the largest crowd that we have seen. The people in attendance had a great spirit. There was a lot of singing mixed with the preaching of the Word. Rabbi taught about the atonement and how Jesus died for both our sins and also to make us whole – spirit, soul, mind and body.
Healing was released tonight, many miracles involving people that had pain for significant lengths of time – their pain disappeared! One testified that a lump was gone. Others that they had fibers in their abdomen and the fibers are now gone. One woman shared, who could not see before, that her eyes were healed and that she could see clearly now. There is good momentum, and we are believing for the crowd to keep growing and we are praying and believing for God to do something explosive!

Pastors Conference
Rabbi taught about the importance of the fact that if we are going to have something to give, we have to first receive it. And were not going to be able to receive it, unless we take time to be with God.

Rabbi also taught about the principles of the Sabbath, the Presence of God, and the need to have disciplined lives; if we are going to truly walk in the fullness of what God has for us. The message really struck the pastor’s hearts. Many resolved in their spirit that they wanted to move forward in this direction. Several came forward to testify of how the Father impacted them personally and how they will apply these principles in their personal lives; in order to be more effective as pastors and leaders.

The Bishops that Rabbi has met keep telling him that what they need here is depth. “The church is a mile wide, but we don’t have any depth of teaching.” The Lord has given Rabbi grace to impart depth into these pastors’ walk.

Crusade
Before Rabbi departed for Nigeria, one of the words of Scripture that the intercessory prayer team gave to Rabbi was Psalm 112, which speaks about how God would use Rabbi in Enugu to impact the city for generations. When Rabbi was in his hotel, praying to the Lord, asking Him what He wanted Rabbi to teach on, he randomly opened the Bible to Psalm 112! Rabbi then began to study Psalm 112, but wasn’t too excited about it, but kept his heart open to the chapter. Rabbi told the Lord: “Ok Lord, if this is You, then You are going to have to show me something here to preach from.” When Rabbi was opening up at the crusade meeting, he began to feel that the Lord was leading him to talk about the fear of the Lord from Psalm 112. The chapter starts out by saying: “Blessed is the man that fears the Lord” It goes on to talk about people growing mighty when they walk in uprightness because they fear the Lord. Rabbi then pointed out the sin of lying, saying: “If you are practicing lying, then you really do not fear the Lord.” The crowd responded and almost unanimously acknowledged, by raising their hands, that what Rabbi was saying is true. He called people forward to repentance from lying. Nearly one thousand sprinted to the altar to ask the Lord to forgive them and deliver them from the spirit of lying. The pastors testified that the people do not run to the altar here in Nigeria, they are more reserved, but nonetheless the people ran as hard as they could to be set free in Jesus name!

Next, the Father directed Rabbi to preach about deliverance, explaining how demons enter through generational spirits, sin, fear, and trauma. He then taught on how to repent and close those open doors and how to practice self-deliverance.

Rabbi ended with an altar call, with a BIG response! By the end of the third night of the Crusade, we have over 3,000 registered salvations! Hallelujah!
Rabbi closed with singing a song called “Shalom.”

As the crowd was walking home, you could hear them singing SHALOM!

It was awesome to see the crowd build each night as the boundaries of the Crusade grounds were overflowing. We are really just encouraged and blessed to see so many people.

The ministry that was going forth through the Word was alive and cutting with resurrection power. It flowed from the heart of Jesus! Rabbi felt fulfilled about what God was bringing and giving to the Church and especially to those who did not yet know Him.

The Lord directed Rabbi to multiple Scriptures, in advance of getting up to speak. One of the words that the Holy Spirit gave to Rabbi was, “when the righteous are empowered the city rejoices” (Psalm 78, Psalm 112, and Proverbs 29:2).

The Lord was encouraging Rabbi that the revelation and impartation that the Church was receiving was going to impact the atmosphere of the entire city of Enugu.

Rabbi heard the Spirit of the Lord speak, “Identity.” The Lord wanted to affirm the Church in Her identity. Through traumatic events and circumstances, people had become passive and beaten down, and they were feeling a lack of control, power, and effectiveness. Some people had become hopeless, thinking to themselves, “This is the way I was born. This is the way things are around me. This is my life, and I can't do anything about it.” Rabbi felt the Lord affirming these believers and those who would come to know Him that night, in who they are in Messiah, Jesus. Sunday night, the Nigerians received the revelation of being: loved, intelligent, beautiful, valuable, and honored. When the Lord told Rabbi the word “Identity,” He revealed His desire for His children to receive a new identity. The LORD was speaking through Rabbi, "You’re a child of the King of Glory. I have a destiny for your life. You're going to recover. There is something in you that’s more real than anything that you are seeing outside of you."

The word that Rabbi delivered is Christ in you, the Hope of Glory (Col. 1:27).

Rabbi then preached from Matthew, Chapter 9. He taught on Jesus’ healing ministry, and he spoke of the numerous times that Jesus expressed His love by extending His hands of compassion toward the people for healing.

We saw encouraging miracles and deliverances over the course of the crusade. A demon-possessed woman received an intense deliverance. An older woman, that was hunch-backed and could not walk, began to stand up straight and begin walking. One man testified, “I know that this sounds strange, but I felt a demon pop out of my eye!” Prior to the prayer time, at the crusade, he could not look at light or even read, but he testified that now he can look at light, and he read from the Bible! Many, many people testified that pain left their body and that their near-sightedness and far-sightedness were corrected. One woman said that she had had lumps in her breasts and that since the crusade she examined herself and found that the lumps were no longer there! 30 people came on stage to testify of their healing. Hallelujah!!!

The Crusade closed with powerful rejoicing, dancing, and celebration, as Gospel Recording Artists Chiyere Udoma and Chioma Jesus joined together for the first time to sing the closing song.

Rabbi closed the celebration with singing the Aaronic blessing over the people.

We have never seen so many heads of major denominations coming together for a Crusade (Archbishop of the Anglican Church of Nigeria, Archbishop of the Methodist Church, The Bishop of the Pentecostal Church and other denominations). They testified, themselves, that they had never seen this happen in Nigeria and that it is unprecedented. Glory be to Father! Through the Wonder in the City Crusade, the Enugu Church and community became One Body with One Purpose: spreading the Gospel of Jesus Christ! Praise the LORD!!

The impact in Enugu is so strong; it can never remain the same! 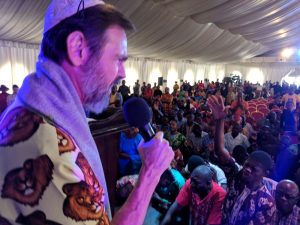 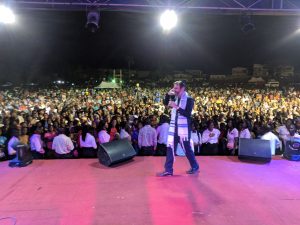 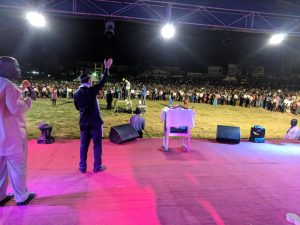 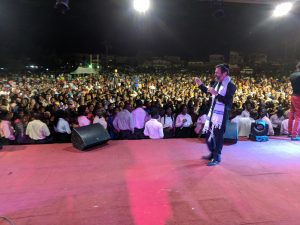 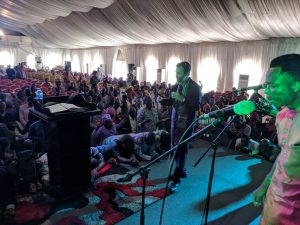 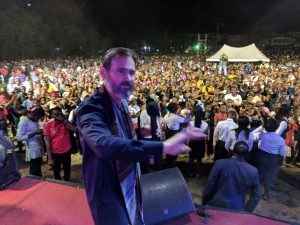 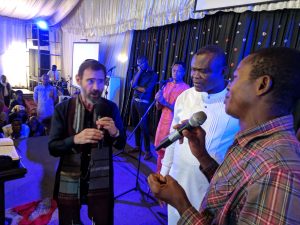 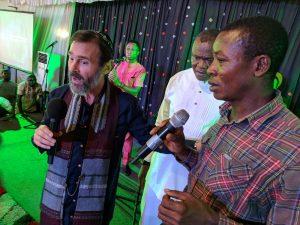 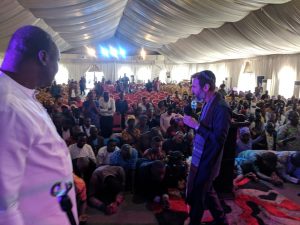 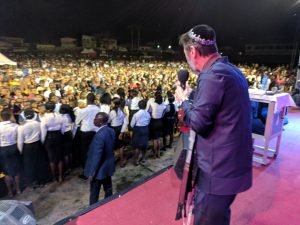 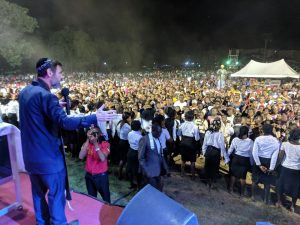 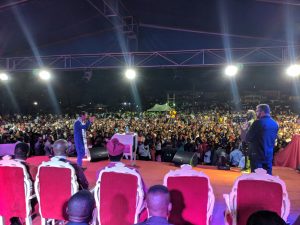 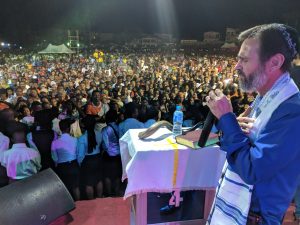 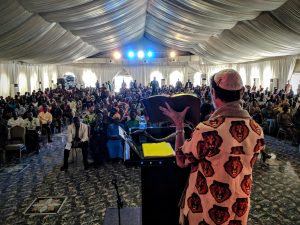 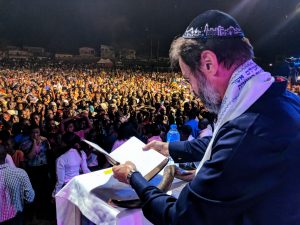 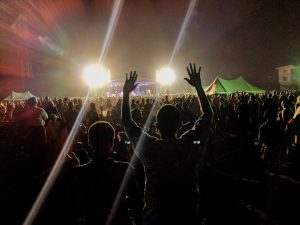 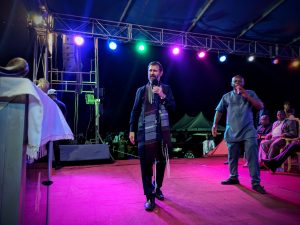 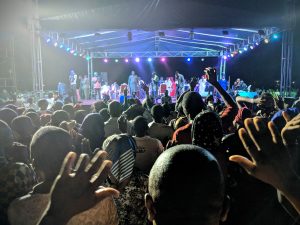 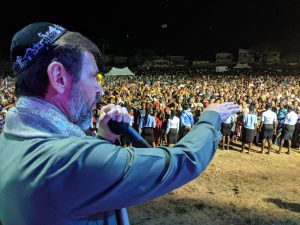